in Earth and Sea, Tonga, Uncategorized

James met me at the sandy beach and took me to Talau House which was to be my home with 6 other guests for the next 10 days or so. I was greeted by Theresa and was adorned with a frangapani and bouganvillia lei – which I wore the whole day. The others felt it would be best left on their beds…but I loved wearing mine… smelling the beautiful perfume and seeing the bright purple flashes of colour every time I looked down.

After a meeting everyone, yummy dinner and a full briefing of the do’s and don’ts when out on the boat…. it was time for bed – and to set the alarm for a very early morning.

The weather looked like it was going to be very windy for the whole time – and although stopped us from going to some of the places we wished to have gone over the 10 days… we still had remarkable encounters and experiences with the whales..even at times when the ocean was extremely rough. 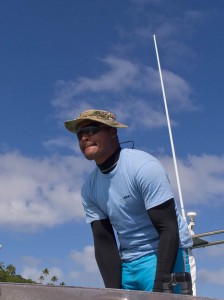 About 400mts ahead I saw a misty puff of rising water…then another. I raised my arm and called out and excitedly touched Robyn beside me and pointed to where I saw our first whales. She called out as well..and our beautiful skipper Ali – our whale whisperer – turned toward where I had sighted them.

In Tonga there are very strict regulations for swimming with the whales…. to ensure that the the whales are not harmed in any way. There are guidelines regarding the angle of approach for the boats… when you can get in the water with them… etc. 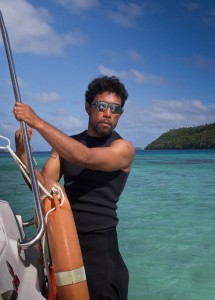 The motor must remain on at all times so the whales can easily know where we are located. Only 5 people are allowed in the water at any time….. and one must be a Tongan guide. Ours was Musu … another beautiful Tongan young man.

My first big lesson for the week I learned on my first day with the whales. I had heard this inner voice for years telling me that I must swim with them. Through the night before I dreamt I was swimming with a mother and calf… and looked into their eyes. It was rough on the first day… and Darren jew, our group leader… said to both Robyn and I …. well – you two saw the whale first, because you are in different groups- which one of you are going in first. I was just about to say.. “I will.. with our group”… and Robyn looked excited ..so instead I said… “You go..”

I wasn’t scared to go in… I just slipped into my generous, wishing others well …. not looking after myself and not listening to my inner voice mode, because I didn’t want to be ‘selfish’…. and for me that day it had consequences which taught me a huge lesson.

The other group went in…. and I could see from longing eyes that they were experiencing the most increadible encounter with a mum and calf. The mum was fairly stationary on the surface… and the calf circled and seemed to be playing with the members of the group. I was wising I was in there. After about 20 minutes the group swam back to the boat… and clambered up the ladder on to the platform at the back and stumbled stunned in to the boat with tears… exclamations… overwhelmed… speechless… amazed…. joyful… sobbing…

I had this sick feeling in my stomoach that I was meant to be in the water. In my dream the night before I WAS in the water in this similar scenario…. I just knew I should have spoken up. 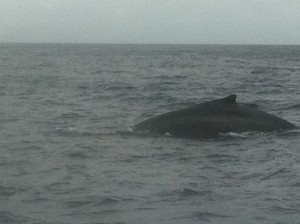 What I had done was slipped into a normal pattern of not honouring myself fully. The person who saw the whales first could get to swim with them first. I saw them first… so without guilt I should have just put my hand up – guilt free – and said yep… I saw them first… and my group should have been first in the water… but there I was, on the boat rocking in the rough water, with a sick feeling in my stomach; wondering why I didn’t value myself enough to just put my hand up and stick to the rules of being the first in the water when I saw the whales first….. and learning later that everyone except Brett and I had swum with the whales before. Why didn’t I value myself enough to think it was ok for me to be in first with the whales? I had to work that out for myself. 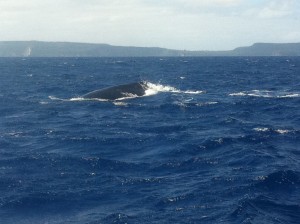 … so … there I was, feeling emotion of longing and regret that I hadn’t just stuck to the facts of who was to go in first… not listening to my dream and my inner voice… but also recognising that I was learning a huge lesson.

…. my turn to go in…. and we swam toward the whales and all of a sudden out of nowhere about 100 mts ahead a huge splash and I popped my head above the water to see another breach … and though OMGosh…. “What WAS that”… and I realised a whale breached just in front of us… and then with a flick of a tail were gone.

That was my first day… and a huge lesson for me.

….. so tomorrow was another day… and yes.. I had recognised what I needed to learn… and I DID from then on have amazing encounters… with many wonderful photos… which I will post in the next few posts.