“It’s a bird……” I crept carefully and quietly.

“It must be asleep.

..Perhaps it is dead?

..Just sitting there on the cold sand.

..It might think if it doesn’t move I won’t take any notice of it.

Shhhhhh  I clumsily gestured to Max as I walked tentatively across the Arctic beach toward this duck.

I bent over to look more closely at this frozen duck and OMG….

Two weeks attendance at the ‘Bird Club meetings’ after dinner did not prepare me for this! Nowhere in our log-book was this duck mentioned. I could not believe my eyes.

I bent over and as gently as I could, nestled my thickly gloved hands around the sides of the duck and lifted it carefully up to show Max – who was by this time nearly beside me where we stood on Zemlya Bunge – or Bunge Land in the language of the Yakutian people is known as Ulakhan Kumalch – The Land of the Great Sand.; in the New Siberian Archipeligo between the Laptev and East Siberian Seas.

Bunge, who I named after the Island upon which he was found – was in actuality –  plastic!

Bunge was a plastic decoy duck!!!

He was once used by duck shooters – to lure other real ducks to the water to be shot.

I was so excited that I had some show-and-tell in the general business of our Bird Club meeting that night.

I stuffed Bunge into my bag.

“I saw a bird today, and I wanted to know if anyone could enlighten me on the migratory path of this bird .. and my photos didn’t turn out that well.. so I thought I….. I would bring the bird to the meeting instead.”

I reached under the table into a small bag I had hidden; and then Bunge made his appearance on our ship at our Bird Club meeting to howls of laughter!

Turns out that Bunge is an Eurasian Wigeon… which may have migrated from any number of places, but due to the ocean currents it was postulated by the more learned members of the Bird Club that he was likely to have migrated more than 5000 nautical miles from the marshes along the Chukotka coast on the east of Russia or Japan, and floated up through the Bering Straight between Russia and Alaska then west with the currents to the East Siberian Islands.

Bunge attended most Bird Club meetings and also enjoyed some time outside -being grateful he didn’t need to spend another freezing winter on the ocean; and he often welcomed passengers back on board after shore excursions as he enjoyed sitting on the open window of our cabin.

Bunge has now immigrated to Australia and is loving the warmer weather with occasional outings into the rain! 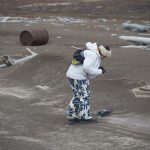 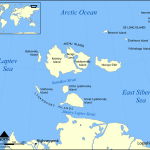 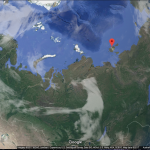 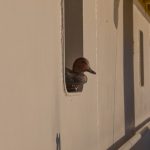 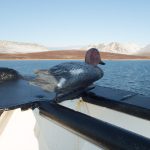