I’ve found myself sliding down into the Rabbit hole of Russian history; trying to gain an insight into why a frozen red book with the English title “Saint George” would be left abandoned on a table inside a Polar Station on Maly Taymyr Island in the Laptev Sea.

Snowdrifts nestled comfortably on a lichen coloured fabric lounge. Metal ribbed heaters with severed rusted pipes, remained on guard under the windows, despite being decommissioned years ago.  Floral wallpaper cracked and peeled off the freezing walls buckling in these extreme conditions.

A spilled plate lay broken on the floor alongside books and a pair of gnarled leather boots.

Sky blue shards of paint hung suspended in the three inches of slippery frozen ice down the hallway encroached upon by a snow drift, where a long eared brown dog and yellow and red butterfly painted on small child’s metal toy truck, lay trapped.

A metal beaten wall plaque of a Greek-Roman god-like figure defiantly bared his strong muscles and skin to the frozen air. He stood beside a white and floral teapot without a lid.

Pipelines and instrument gauges were lifeless.

….Why did this family leave?…

Words were frozen on the pages of hundreds of books in the two rooms of an extensive library, where some lay strewn in a pile under snow and ice; and others stoically stood their place on shelves. Cyrillic infiltrated the space where so many questions filled my thoughts.

…How could they live here?..

Here was an abandoned polar station where the precious had been probably looted, yet the remnants of a family seemed to still survive. Walking carefully and tentatively on the ice and pulling my grey neck warmer up to cover my mouth and nose from the freezing cold air, I felt quite uncomfortable in my voyeuristic endeavor.

A dinosaur remained unmoved as he stood amongst posters of Russian rock bands as it stared across to the opposite wall to where an armadillo; an orangutan; and a fluffy topped bird remained captured on a decaying wall.

A Russian gymnast hung holding his pose in crucifix position on the rings alongside a gymnast wearing a medal whilst accepting flowers at the Olympic presentation ceremony.

I searched into the large pretty eyes of young woman wearing a floral head garland and lipstick. She looked into mine as I asked her so many questions….but her lipstick remained motionless.

….What sort of life would it be for a teenager and a small child to live here in such isolation?…..

I could understand the text on the cover of this red hard bound book, but not it’s significance on a table; in a deserted polar station in the Laptev Sea. 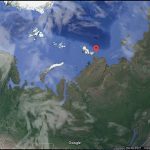 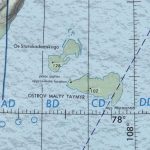 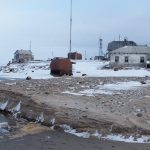 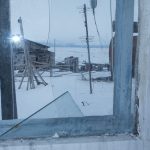 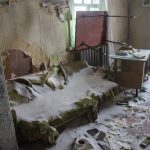 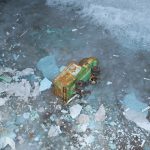 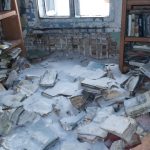 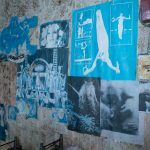 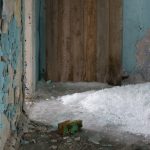 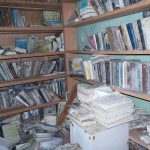 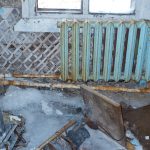 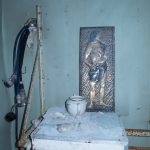 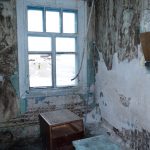 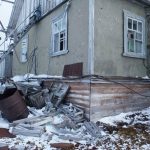 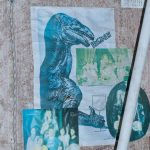 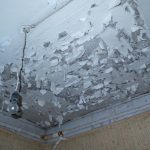 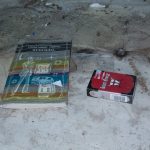 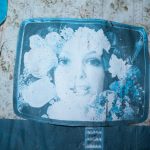 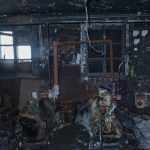 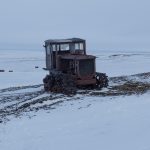 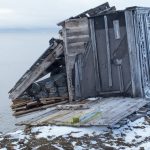 I’ve learned so much about Saint George whose legend is not without controversy, and far too difficult to go into in depth here; but suffice to say that Saint George was thought to have been a Roman soldier of Greek origin who was sentenced to death for failing to recant his Christian faith.

In Russia he was iconised on the seal of Vasili 1 of Moscow in 1390 and eventually Saint George became the patron Saint of Moscow, and in 1923 was adopted as the national emblem until the dissolution of the USSR in 1991.

Today throughout Russia Saint George symbolises strength, courage and heroism. The highest military bravery awards are called the Order of Saint George and the Cross of Saint George; and since 2005 the motto “We remember, we are proud” echoes from the stripes of the ribbon of Saint George, a symbol of the Soviet Union’s defeat of Nazi Germany in the Second World War.

After various reincarnations in Soviet times, the ribbon has made a comeback in Vladimir Putin’s Russia to boost national unity. In Ukraine this symbolic ribbon has been banned, with other ex-USSR regions treading a wary path of objection.

I wonder whether the exposed skin Greek/Roman god-like plaque in the kitchen was of Saint George; in a more domestic circumstance sans black horse and spear? 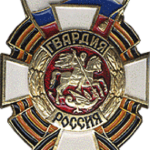 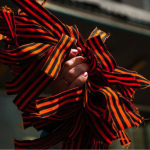 My response to walking on Малый Таймыр ….

This Maly Taymyr Island polar station was the most interesting of the eight stations we were so privileged to visit on the Russian Arctic.

This polar station’s geographical location with its’ limited accessibility, meant that many of this family’s daily belongings had not been looted. I found it quite unsettling walking into someone’s home without them walking alongside me.

I’m intrigued by how this one family whose life is evidently rooted in rock music and literature, dealt with living in such extreme conditions; and how they coped with such isolation – only one supply ship a year, and flimsy communication at best.

Russian President Vladimir Putin has recently indicated the importance of an increased military presence in the Arctic north of Russia, and with Russian oil exploration activity increasing in the region, I suspect that there will be no more permits issued to visit these stations.

..so many unanswered questions….

I keep looking into those pretty eyes of the flower-garland girl who witnessed this family’s life.

I see glints of their lives – perhaps inspired by Saint George to be courageous and loyal to the country which remained strongly stuck on the walls of a this disintegrating building.

I see glints of hope, innocence and trust.

I see glints of eternal playful youthfulness; yet recognise the irony of transience and impermanence.

For more photographs of this incredible journey pop here.