in Things I just do!

#tennisfan hahahaha….. lightening up on a hot Qld summer’s day at the tennis!

#tennisfan hahahaha….. lightening up on a hot Qld summer’s day at the tennis! Off I went to the tennis. ..Haven’t been for probably 30 years and this year was the year of instead of saying “I would love to go to the Brisbane International tennis one year”.. this year was it! 😉

I hopped on a train and then snaked my way with the masses along the pathway toward the cheers and loudspeaker announcements – unaffected by the searing heat as we were. We each sought reprieve from the blazing sun and the stadium provided that momentary shady respite; yet without a breeze it was more like an oven than a sanctuary from the solar blaze. My folder paper fan #tennisfan – was absolutely brilliant!

Pat Rafter Arena was far more intimate and smaller than I expected and less gladiatorial than the Gabba at a One Day International cricket match… yet was such a lovely venue. Every seat was a good seat; mine particularly so only 4 rows from the front 🙂 – and when there was a rally worth encouragement and applause – the atmosphere was absolutely electric.

I saw some big guns play…. but not my favourites… I really wanted to see Nadal and Wawrinka but the storms last night played havoc with that plan and the matches were postponed.

I had such a wonderful day! Cheering and clapping all the players for their expertise and sportsmanship…. chatting to those around me…. seeing elite athletes….. Icecream….. Sun…. Hot summer days. I felt a lovely sense of contentment and gratitude. I’m off again on Friday and the men’s final on Sunday night. I do secretly hope though that I do get to see Nadal and Wawrinka play!!! 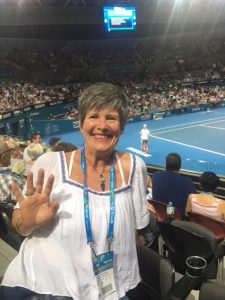