So… the big Golden Rock in Kyaiktyo in Myanmar.

We were packed into a fairly new, troupe-truck – seven rows of six abreast; except for Max’s row because he had to pay for two seats because his knees had to go diagonally because they wouldn’t fit in front of him. People here are so small.. and I even feel like a giant standing beside some of the women!

It was quite funny…there was a lot of confusion around why Max’s row only had 5 in it and after we had it sorted with one of the truck organisers…another would come along and try to stuff the sixth person in the row! – until we got him to actually look down into the seat and see where Max’s legs were and there was NO way a sixth person could fit in and we would be prepared to pay for the 6th seat.

After a bit of argy-bargy and constant head counting …off we went. Ooops.. well we thought we were on our way but around the corner we stopped whilst a tyre was being checked and re-inflated. Then we were on our way… oopps… not quite… another stop, but this was for something not of a mechanical nature. It was for ‘fund raising’.

The metal ladder steps were quickly dragged to beside the rows of tourists and a man with a laminated card and a huge silver bowl with some coins in it walked up and started a chanting explanation about something and then I soon realized it must have been outlining the charity that he was seeking donations for. There were two assistants on the dirt below the wobbly frame, who wrote receipts for those who contributed larger sums of money.

There were two other men who delivered speeches following the first one; but their helpers didn’t write any receipts. I think our truckload was ‘donated-out’ by then.

So… off we went. We were on our way up the mountain to see the ‘golden rock’ which defied gravity. OOpps…. Not quite. We stopped again. This time it was to collect the money. Out came the wobbly metal-framed stairs and the money collector started form the front and worked his way back building his fistful of cash from keen Buddhist pilgrims …and Ross, Frank, Max and I. The confusion about trying to pay for the extra person’s spot which Max’s diagonal legs took up still continued. It was a bit funny actually because English isn’t spoken at all much here… and my command of Burmese consists of two words. Gestures and money were the key here!

So – this time we were off! Up the steep winding mountain to where there were literally thousands of tourists. It was quite a lovely atmosphere with everyone wanting to see the miracle of nature plastered in rectangular gold-leaf offerings placed there by men. Women aren’t allowed to touch the rock.

I loved the organic nature of the men chanting in a small room just to the side and beneath the rock. Their voices were rich and devotional. I found that quite beautiful and in stark contrast to the harsh blaring of loudspeakers at the entrance to the monasteries and blasting across the towns and cities.

Stalls lined the wide walkway to the golden rock. The usual fare. It was similar to most markets anywhere in the world really. Souvenirs – caps; sunglasses; cut fruit; rows of bottled water; the smell of hot oil and fatty food; saffron and paprika quails adorned with thin slices of lime; Sliced grren mango; bulbous pomelo; beetle-nut; key-rings; T-shirts;..and the list of ‘stuff’ goes on.

Not all markets though would have chunks of Sandalwood and one stall in particular I was told later by our guide some of what was being sold was quite illegal in Myanmar. It was a herbal medicine stall catering in particular to the Chinese tourists; and there were the front legs of an animal; centipedes; scorpions; urchin spines; and many other body organs from wild animals. It is illegal in Myanmar to kill wild animals for medicine.

The sound of the gongs high on the hill – prayers of wishes for all sentient beings was lovely. Although there were lots of people, it didn’t seem to be so packed it was uncomfortable. People slept under square shade tents. Families came early to pick their ‘spot’ for the day’s picnic.

There were some hotels at the top and luggage was carried atop of heads and shoulders in huge open woven baskets. Some elderly people were carried in large deck-chair like frames – a person at each end. I’m glad I could walk.

Oh…actually , that’s not entirely true. At one point as is customary, one’s shoes and socks need to be removed entering the sacred walkway to the pagoda, stupa or temple. I was enjoying the lovely smooth stone under my feet until I felt the stickiness of someone spit. Yuk!. .. several times under my bare feet I felt wet stickiness; sometimes red from beetle nut; and it did cross my mind that perhaps a ride being carried might have been a better option!

I need to look up on the internet a little more about he legends and significance of this rock in Buddhism. It was quite lovely not having English translations plastered everywhere, and we were a part of real tourism in another country, not just watered down for ‘westerners’. It was still tourism though… and it seems the same the world over regardless of language and culture.

I looked at the rock and was in gratitude for being able to see part of our wonderful geology of earth…then rang the large bells with my own prayers. 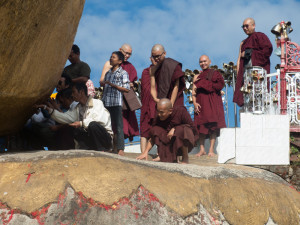 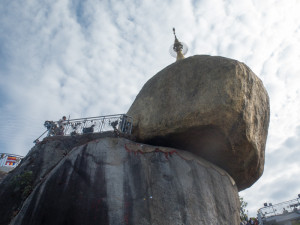 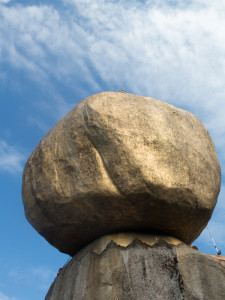 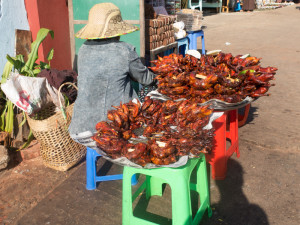 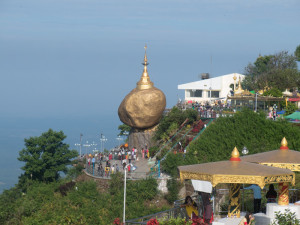 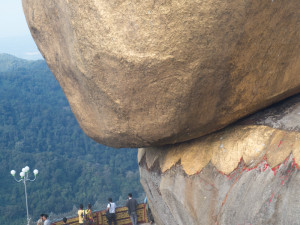 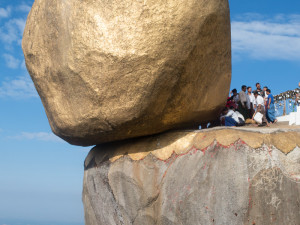 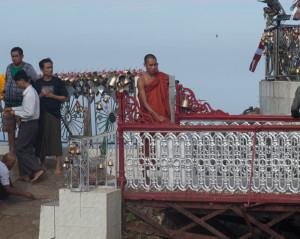 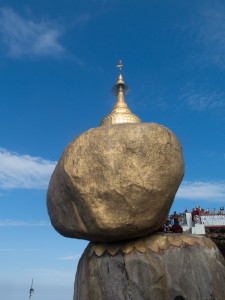 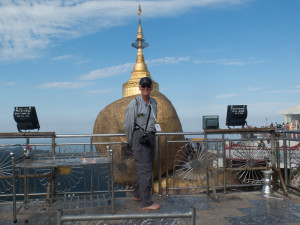 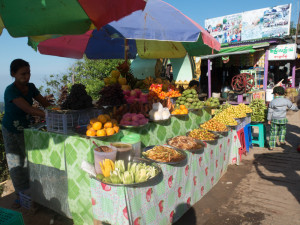 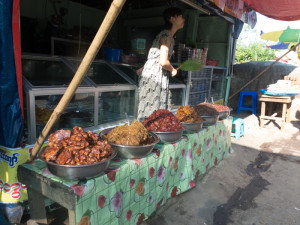 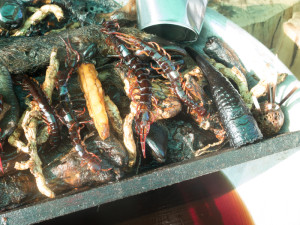 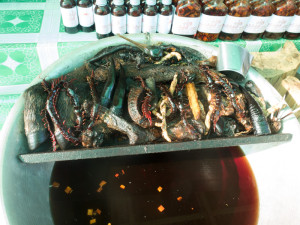 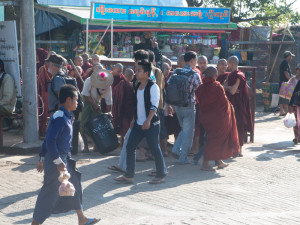 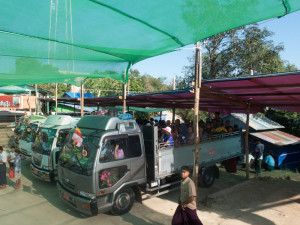 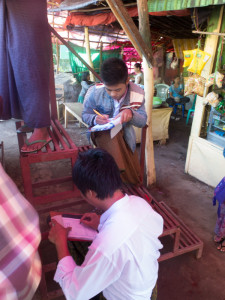