Clean white sheets; a beautiful doona; yummy food; a view over a city which sprung up out of nowhere after a days driving through rural Siberia… and here we are in Yekaterinburg, all together in an exquisite hotel – all hopeful to be together in Paris on July 17th for the finish line. Today though only 89 out of the 105 or so cars are tucked up here; whilst the others are scattered around Russia being repaired and assessed as to where they can rejoin our intrepid group.

The inclement weather in Russia has been with us again today and our planned ‘Time Sections’ were replaced by a very fun track course that was like a BMX track on steroids. Penny had fun. She is an endurance girl rather than a speed queen and she lumbered a bit over the bumpy bits and wiggled her bulbous rear end; and Max and I had a great time.

Our drive today was a little more undulating with our elevation oscillating between 120mts and 80mts above sea level. The soil is incredibly rich and fertile and the chocolate coloured earth supported gardens of vegetables along nature strips alongside the roads and every available piece of earth available for each family.

Evidence showed that for many, life wasn’t easy. Crops had to be grown in the summer because in the winter many areas have extensive period of -20 and feet of snow covering the soil for about 4 months a year. Bales of hay were scattered on the green fields like dice thrown randomly.. just as the storms hung on the horizon.

The Birch trees flanked the roads. They are a symbol of Russian nature and Russian beauty; the birch tree (“bereza” or “berezka” in Russian) has a very special place in the country’s culture. The word “bereza” is very ancient and is connected with the verb “to keep, to take care” (berech), since the Slavs considered the birch as a gift from God, given to them for protection. Over the centuries, birches are planted around the village for protection; footwear; for paper instead of parchment; and used in medicine and revered for it’s healing qualities and recognised that to even walk quietly in a birch forest can create healing. I’m going to see if I can have a wander in the birch forest tomorrow. I loved taking photos of the birches whilst we were driving along. I had to have in the back of my mind all the time though that I had a task to do and couldn’t let myself get too lost in the forest in my mind… otherwise Penny would have become lost in the forest too!

We drove through small villages which seemed to be like a time warp. I saw rotund women wearing a triangular scarf, plain clothes and dark boots, bent over in the fields picking and weeding with gnarled hands. Some people stared from behind glass windows; others who were more inquisitive came out to wave, and those who were more affluent, usually the children; raised their smartphones in the ‘smartphone salute’ as Penny drove past them. It was a relatively easy drive today and how wonderful to be treated with such a delicious banquet of food.

In the misty rain through huge glass panels I can see across this industrial and administrative city with such an interesting history. Following the October Revolution, the family of deposed Tsar Nicholas II were sent to internal exile in Yekaterinburg where they were imprisoned in the Ipatiev House in the city. In the early hours of the morning of July 17, 1918, the deposed Tsar, his wife Alexandra, and their children Grand Duchesses Olga, Tatiana, Maria, Anastasia, and Tsarevich Alexei were executed by the Bolsheviks at the Ipatiev House.

It has since been a city with various administrative and political roles; including Catherine the great of Russia and Boris Yeltsin in my book I will outline more of this fascinating history of this city.

I woke again to the misty rain through the huge glass windows and the thought crossed my mind to ask the rally organisers if we could all have a late check-out so we could enjoy this beautiful hotel a bit longer. LOL.. That was NOT likely to happen but a few extra minutes in bed making up excuses to not get up was lovely.

Today is the half way day of the rally… and I’m in a place right now where I haven’t a clue where the bathroom is in the middle of the night let alone the toilet! I don’t want to wake Max up so I quietly try to find it but honestly sometimes I just can’t remember which hotel room I am in and I feel so displaced. Then I just have a little giggle inside and remember what an amazing adventure this is.

They call this summer in Russia.. LOL… 10 degrees maximum today and misty rain. It wasn’t as cold as the other day… but where on earth is summer?!!!! We had the roof on today… we could have probably done without it but the storms are rather random. penny will have her roof off tomorrow though!

Leaving Yekaterinburg I noticed the buses were relatively empty; as they were the previous afternoon whilst we were gridlocked for an hour moving only 100mts. The increase in vehicular traffic has made traffic congestion in the cities some of the worst I have experienced anywhere in the world.

Russia’s military history is often displayed with pride. Statues of leaders stand beside machines used in war. Today in a field I saw about 100 tanks positioned in formation with green tent like nylon draped over them and their gun turret poking out like an awkward chimney. Replica fighter planes are placed in the centre of civic squares.

The landscape was more undulating today and the elevation rose to roughly about 370mts above sea level. Pine forests on the gently curved slopes have slowly diluted the birch forests in the low wetland areas. Sawmills skirted the towns. The stacks of firewood were a different colour the further we drove west.

It was difficult steering Penny today on the roads which were rutted where the wheels of the trucks had formed tracks which sunk into the tarmac bitumen. Many drivers thought there was something wrong with their steering until they realised that their wheels were tracking in the grooves which went on for hundreds of kilometres.

We crossed over into Europe today… across the dividing line between Asia and Europe. I’m not quite certain about the reason why there is this particular boundary… and will have to let you know about this one in a later post. For a couple of crews this was quite an emotional landmark because they didn’t ever think they would make it past Asia, and to reach what is termed ‘Europe’ was a meaningful milestone for quite a few.

Something very special happened today in Chusovoy and I was quite overwhelmed actually. We were invited to a civic reception at a sports field where we completed a lap of the oval and went up a ramp to a ‘car podium’ which bisected hundreds and hundreds of jubilant locals. Our welcome was extra-ordinary. I felt quite awkward receiving such accolades and to be treated in this way…. people reaching out and kissing my hand; grasping my hand and thrusting their babies for me to hold their hand; email address written on pieces of paper thrust into our palms, compressed by hopeful squeezes of well wishes and ‘good luck’.

It was strange to be revered in this way, and yet to retract from it seemed totally inappropriate as well… so I went along with the joyous community celebration by celebrating myself what a wonderful occasion it was where so many Russians genuinely were excited, pleased and inspired to see people driving these amazing cars from China to Paris through their local town.

It was surreal. I have been so surprised at the generosity of spirit of the Russians. Today I was at a passage control and a truck driver came up to me and took off his coat and said in a strong accent “You have”…. He wanted me to take his coat. I tried to lovingly say he was far to generous and he would be cold, but he would have no part in what I was saying and put it on me and his chest inflated with pride as others took photographs of him giving me his coat. Yesterday a man stopped beside us as we boiled the jug for a cuppa and he thrust in my hand his cigarette lighter and then he clasped both his hands above his head and exclaimed I’m sure something like “good luck on your travels’. I have never encountered such warmth and excitement before, and it isn’t just a curiosity like in India and Bhutan or even in Morocco… here it is like the people are willing us on and being our cheerleaders. The atmosphere entering the hotels in the evenings with the crowds compressing the entry gates is remarkable.

The car park this evening was once again a place of tinkering for many. The rough roads of Mongolia created some carnage and some are still limping through, trying to get closer to Paris. Some crews have parts being transported to our next rest day in Kazan and are praying that they can limp there.

Penny is doing great. Tonight we just had to pop the oil drip sheet under her and tuck her up for the evening ready for a 630km day tomorrow. We are all having a wonderful time with big days of driving and also squeezing in as much as we can within the time constraints of the race! 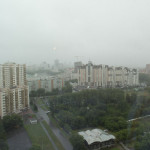 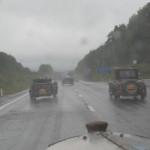 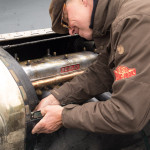 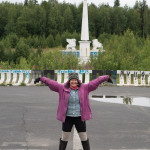 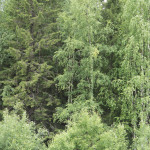 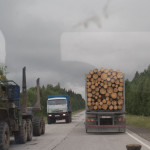 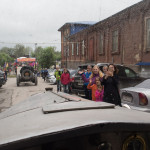 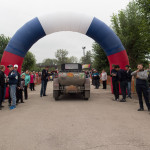 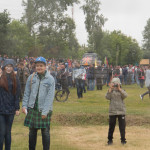 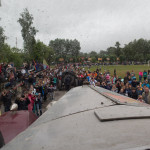 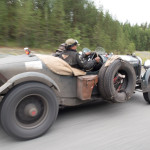