Mud…Kremlin at Kazan and sun on skin!

The sun streamed on to my face at 3am as I stirred to realise my eye patch had become dislodged and I kept thinking that I wanted to write a blog post about our past few days. I had a little bit more sleep and now I’m going to pop out a brief broadcast so I don’t get any further behind!

I’ve just popped on the this little verandah which hangs precipitously on the edge of a white institutional looking building; the curved railings laced and holding the crumbling façade from falling; and there seams to be hundreds of people already flocking around the cars in the car park. 5am and the world is awake!

The grey misty cover was cold again today and although we had the roof on Penny it was often at times wet. We didn’t have the water spraying up through the floor near the handbrake though because Max found an empty chip packet to pack into the hole. Who would have thought a shiny bright yellow and green packet could perform two such useful tasks….. the first one holding chips which were just soooo yummy.. and the second keeping Max’s trousers dry!

We had three time trials in succession today and they were kinda fun… until we saw the ‘closed’ roads with locals coming towards us in the opposite direction and Penny’s tail end started to wiggle a bit and slide on the slippery surface.

We weren’t trying to go fast, but rather stay on the road as we could see the tracks of those preceding us who had spun a full 360 on the curves. I kept thinking what a wonderful track it would be for those who were racing and better suited to those conditions.

At the end of the last time trial we were greeted by locals waving and cheering us on. A local man presented me with a huge bunch of wildflowers, which was a little overwhelming. There are about half a dozen of us ladies in open cars.. and the locals spontaneously gathered wildflowers as they were waiting amongst them for us.

The fields of wildflowers accompanied our day under the cool grey sky and was quite lovely seeing the sprays of white, yellow, purple and blue in the spaces between the lush and luminous forests.

A feature for me other than the Mongolian landscape has been the generosity, excitement and genuine well wishes from the Russian people. It has been quite astounding.

A racing track was made available in the afternoon for our fourth time trial for the day. Penny has a few oil drips so we decided to voluntarily pass on that time trial as we did not want to leave oil on the track. Lots of other crews had smiles from ear to ear being able to go fast around a track without potholes!… actually some of the holes on the roads in Russia are way larger that pots!.. and have caused some crews a nightmare with damage to their cars.

Our rest day in Kazan was needed for many crews and was a time for everyone to re-group for the next stage through Europe on toward Paris.

The car park was a hive of activity with spanners and hammers and over-alls. Garages and workshops throughout Kazan were a hive of activity as spare parts were sourced; manufactured and installed; engines tuned and cars washed. Throughout the day the brown shells were being replaced by shiny vehicles; standing like coloured lollies, with jubilant drivers and navigators walking away knowing their cars were ready for our next drive from Kazan to Novgorod.

Max fixed attended to the headlights in the morning and found it was a fuse which needed to be replaced rather than wiring – so that was a good thing. Everything else is fine with Penny, so we decided to walk a few kms down to the Kremlin – which means castle… and that was a fabulous afternoon.

There is far more I learned about the history there, but will have to write about it another time. We went inside a church, a mosque and the most fabulous natural history museum with an incredible display of rocks.

Saying “English, English” to the assistants at the museums didn’t seem to make any difference as they continued in eagerness to explain about their exhibits in just a slightly higher volume and exuberance. They seemed so pleased I accompanied their explanations around the displays. Hugs at the end and it didn’t really matter that I missed most of the information which was shared.

This is just a quick report now because I only have a few minutes.

Sun today!!! Hooray… blue skies and sun today.. a hat instead of a woolen beanine and gloves! Yehhhh!!

We stopped and I spied some wild cherries…a little tart but very yummy though… and then we stopped and chatted to some ladies harvesting wild strawberries in the wildflower fields. Language didn’t seem to be a barrier to friendship and connection.

Everywhere we stopped we were joined by inquisitive locals. A phone call from someone to their family members and before our kettle was boiled it seemed like their whole extended family was surrounding us looking inquisitively at Penny and trying to comprehend how people could actually be driving to Paris!

We left the main truck haul for most of yesterday which was a relief. I find it quite exhausting driving on the tracked roads packed with trucks. Even though some sections of the road are quite abominable with the broken surface, I find it far better than the 2-laned main roads that is the truck transport route.

Driving into here yesterday afternoon along the river had a real holiday atmosphere with bare bodies enjoying the sun and water along the river… and it seemed like we were finally experiencing summer in Russia!

Ok… my time is up and we have to get on to the road for a time trial starting at a ring track I think… so I need to go.

More news when I can.. 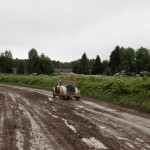 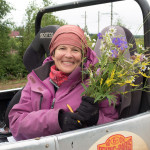 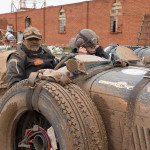 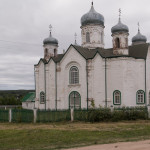 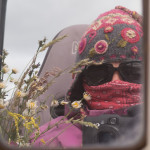 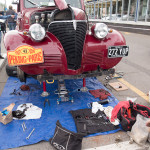 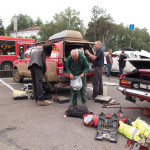